Feeback for creating a Drupal site

If you think that this documentation isn’t clear enough, help us improve it!

Please reply in this thread with your comments.

I just ran through the tutorial and have the following feedback:

Also, in general, throughout the guide, it can be hard to see what exactly is shown on the screenshots. While the description should be sufficient, it would probably be nice that readers can just check the screenshots directly. Consider for instance this screenshot compared to the one currently displayed in step 3. Personally I would prefer not needing to click on any of the screenshots to actually read them. 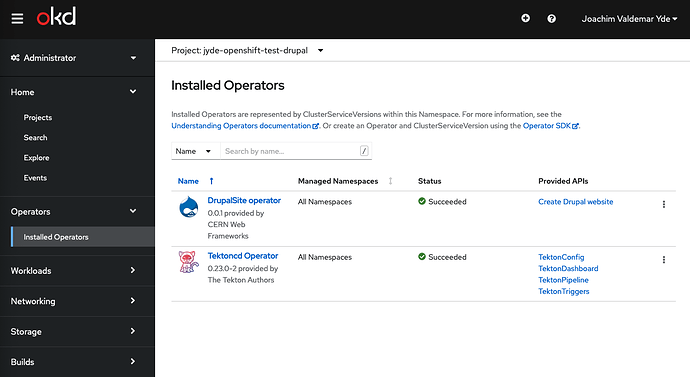 Hi @joachim ! Thanks for your feedback. Your experience is aligned with another site admin’s that tested this tutorial. Following this, we decided to not release this documentation.

A new webservices portal (replacing this) is in the works, which is the intended final GUI. We expect the first interfaces to be ready by mid September. Accordingly, we’ll keep pointing site admins to the old infrastructure for the creation of new sites until then, even though we’ll start enrolling volunteers for migration by the end of next week.

I’m following these steps, but the operator’s CREATE never seems to complete, as the website URL does not become visible from the CERN network.

In OKD, when I switch to the EVENTS tab, I get :

and the RESOURCES tab gives me :

Thanks for your question!
Indeed, and to clarify, you do not have access rights to list resources or inspect events ( although there is not much to see here). All you require (while we don’t have the new portal for managing Drupal sites) is to check the YAML section, where you should be able to edit the URL, webDAVPassword or other relevant fields you may want to edit in the Spec section.